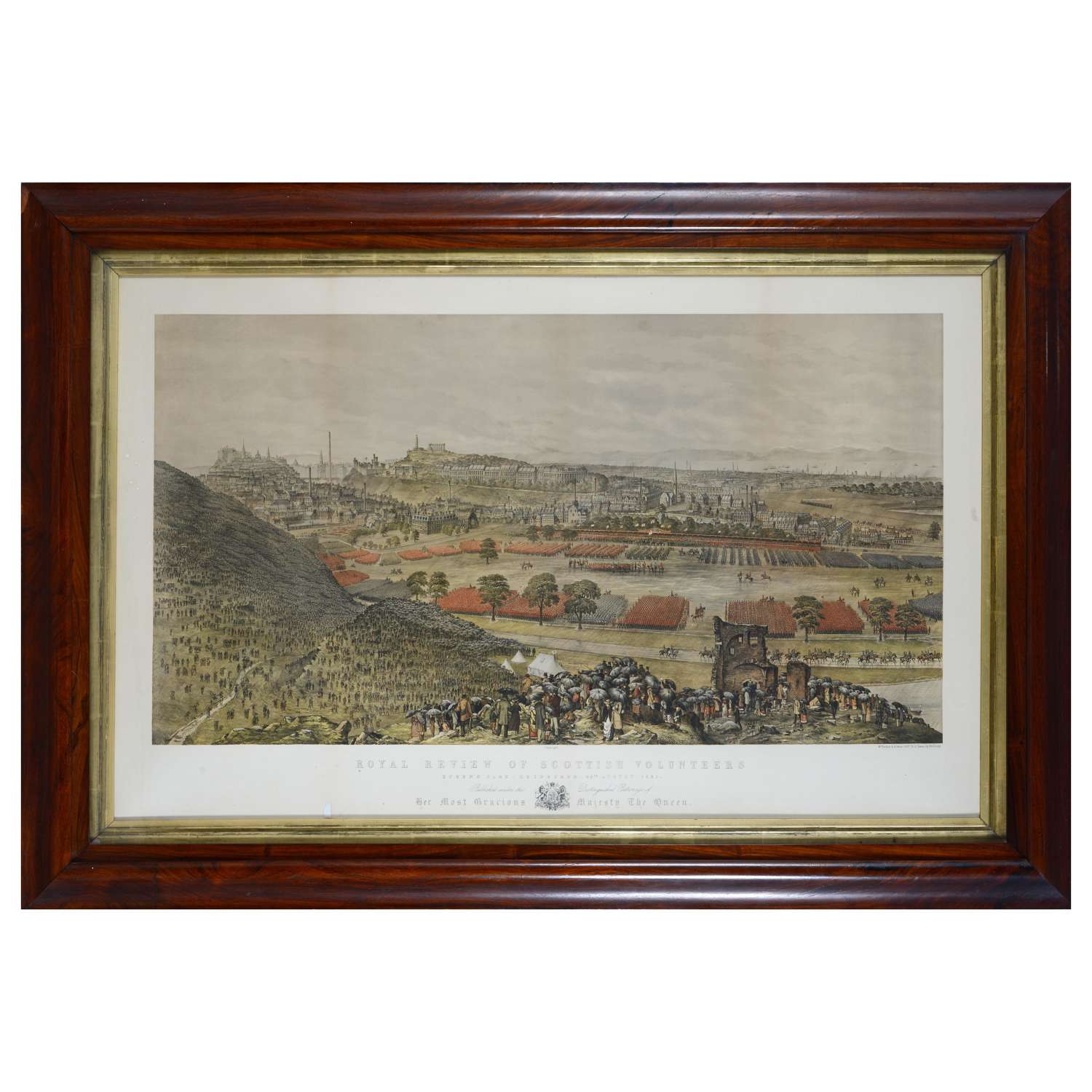 'The Wet Review' - The Royal Review of Scottish Volunteers

The Royal Review was held in Holyrood park in 1860 and was the defining social event of the year.   On the same ground, in August 1881, and before a vast multitude, Her Majesty reviewed a force of 40,000 Scottish Volunteers. So many men under arms had not been massed together in Scotland since James IV marched to Flodden.

“Although unhappily marred by continuous rain,” says the Duke of Cambridge’s order, dated Edinburgh Castle, August 26th, “the spectacle yesterday presented to her Majesty was an admirable sequel to the great review held recently at Windsor, and the Queen has observed with much gratification, the same soldierlike bearing, progress in discipline, and uniform good conduct, which distinguished the Volunteers there assembled, were conspicuous in a like degree on the present occasion… The Field Marshal Commanding in Chief has been commanded by the Queen to express to the Volunteers of all ranks her entire satisfaction with the appearance of the troops assembled.”

The whole force was commanded by Major General Alastair Macdonald; and perhaps none were more applauded in the march past than the London Scottish, led by Lord Elcho. The bands of the Black Watch and 5th Fusileers were placed beside the saluting post, whereon was hoisted the royal standard, as borne in Scotland, the lion rampant being first and fourth in the quarterings.

Undeterred by the incessant deluge of rain, the Queen remained till the last, and so did the rest of the royal party; but even ere the second division had defiled before her the vast slopes of Arthur’s Seat had been greatly denuded of spectators, “and the great mass of umbrellas slipped down and gathered about the Holyrood gates, egress through which was still denied,” owing to certain instructions adapted evidently to a fair-weather gathering.

It was greatly to the credit of these Scottish troops, and a proof of their excellent discipline, that to the very close of that trying and harassing day, their behaviour was quiet, orderly, and admirable to the last, and not a single accident occurred.

Condition: The colour of the lithograph is uniform and bright, the left and lower margins have some white spots.  The 19th century ogee rosewood veneered frame is in good condition, the upper left corner has a 3cm chip, otherwise it is very well presented.